The Millvina Dean Memorial Garden was officially opened and dedicated on 31st May 2012, in a simple, dignified ceremony, in the presence of the Mayor and Mayoress of Southampton and forty guests and members of the public. Over two years in the planning, the garden is a result of close co-operation between the Millvina Fund and Southampton City Council.

When nine-week-old Elizabeth Gladys Dean, better known as Millvina, left the United States and returned to England with her brother Bertram and her widowed mother aboard the liner Adriatic in May 1912, one month after the loss of her father, the Daily Mirror reported,

“She was the pet of the liner during the voyage, and so keen was the rivalry between women to nurse this lovable mite of humanity that one of the officers decreed that first and second class passengers might hold her in turn for no more than ten minutes.”

Somehow, it’s not surprising that from her very first days, Millvina, the “lovable mite of humanity,” brought forth outpourings of love from others – and she returned it many fold as the essence of her long, wonderful, fulfilled life.

More than 70 years after its loss, Millvina, perhaps a bit reluctantly, decided to involve herself again with Titanic. The love Millvina had received from total strangers on board the Adriatic, from her mother Ettie and brother Bertram, and from a supportive extended family, she now extended to literally thousands from all over the world, from the smallest child to world-famous celebrities, from next-door neighbours in her beloved hometown to “pen friends” who swamped her with mail.

Who can ever forget the image of Millvina, in her late 80’s, at a British Titanic Society convention patiently dealing with a hundred-foot-long queue of autograph-seekers? When someone suggested that she take a respite, her response was, “Oh, no, I don’t want to disappoint all my friends here.” And so she continued to make friends, especially young people.

Who can forget her two-cup teapot, often overwhelmed by a large number of visitors to her home? Why not purchase a larger teapot? The answer was simple: Serving eight or ten people, two at a time, from such a tiny pot ensured that the cherished visits from her friends would last an entire afternoon.

Fate would decide that Millvina, the youngest person aboard Titanic during its tragic voyage, would become the final living survivor. As with everything else, she accepted the sobriquet of “last living Titanic survivor” with grace and aplomb.

Millvina loved life. To her last days, her vitality, her warm sense of humor, her pragmatism and her joyous philosophy served her well, and endeared her to all.

Today, as we dedicate this lovely garden in her memory, we symbolically see some of the elements that made Millvina so special. There are the flowers and plants she knew and loved; benches that encourage conversations and friendships between people; a central pathway that suggests moving on in one’s life, and on the central plinth, her simple yet profoundly reassuring advice to us all, “Have a kind heart and a sense of humour,” engraved in a stone which itself reflects her amazing endurance.

As was so clearly shown during observances of Titanic’s centennial just six weeks ago, the world shall never forget the Royal Mail Ship Titanic, her passengers and crew. Nor shall we ever forget the remarkable lady named Elizabeth Gladys Millvina Dean, whose life and love we celebrate today, and for all time.

The Mayor of Southampton, Councillor Derek Burke, officially opened the garden and then Bruno Nordmanis, Millvina’s dear friend and constant travel companion, unveiled the grey slate plinth, which for the occasion had been draped in a White Star Line flag kindly loaned by British Titanic Society Honorary President Bob Pryor. This was followed by a blessing by the Rev. Dr. Julian Davies, Rector of St. Mary’s Church, Southampton.

The garden consists of a grass-covered elliptical open space bisected by a pathway, with the engraved plinth alongside. At each end of the ellipse, curved benches offer places of respite. Surrounding the open space are a green and gold privet hedge, and flower beds featuring plants of many colours, aromas and textures. The garden is situated to the left of the entrance to Southampton’s SeaCity museum.

The proceedings over, at the invitation of the Leisure Department of Southampton City Council, all guests enjoyed light refreshments, before being taken on a private guided tour of the Titanic exhibition inside the new SeaCity museum.

Among the forty or so people present that afternoon were members of Millvina’s family; officials from Southampton City Council, including Nick Yeats and Cliff Brown of the Parks Department, who have been closely involved with the conception and design of the garden; Councillor Brian Parnell; and Glen Gardner from Associated British Ports. 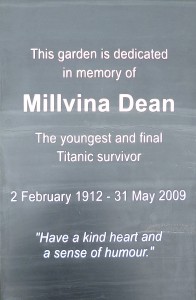