As we are all aware, the Titanic disaster is a well-known story of global proportions, with few people unaware of when the ‘unsinkable’ British liner foundered in the icy North Atlantic Ocean in April 1912, claiming over 1,500 passengers and crew. No other shipping disaster had shocked governments to make sweeping changes to its laws for the safety of life at sea – and nowhere more was that tragic loss of life more greatly felt than in Southampton.

A total of 885 crew had signed-on the fated ship, and 673 perished; and of these, 549 lived in the port.  Chapel and Northam districts suffered the greatest trauma, with very few streets reported not having lost someone.  Overnight, 232 women were made widows and 1,239 children were orphaned.  The loss also resulted in most dependants suffering the further hardship of having no breadwinner to bring home a wage.  Within days, Mayor Henry Bowyer launched a relief fund to help ease their financial burden.   A national Titanic Relief Fund was also created which eventually raised £413,000 (in excess of £20,000,000 at today’s values).

On the afternoon of Saturday the 20th April 1912, the town came to a standstill; flags were lowered to half mast, and many shops closed their shutters out of respect for the occasion.  Mayor Henry Bowyer and members of the Corporation of Southampton attended an impressive memorial service at the principal church of St. Mary’s.  Led by mace bearers wearing formal attire, and carrying the Mayor’s ceremonial emblems of office, a long cortege slowly wound from the High Street to the church.  Included in the procession were members of the Board of Magistrates, the Harbour Board and agents from almost every shipping office in the docks.  Consular representations were made by America, France, Spain, Belgium, Turkey and three countries from South America.

Ranks of sailors and officers from the White Star and American Lines’ set-out for the church from other locations in the town.

People of all classes and spiritual belief lined the streets, many of them labouring to hide their grief as the sailors passed-by.

As the Mayoral procession approached St. Mary’s Church, the mournful tone of a single bell rang out to break the silence.  Upon entering, sombre organ music could be heard; Bilan’s “Legend”, Danbose “In Paradisum” and Trauermarsch’s “Marche Funèbre.”  With most of the congregation already seated, Mayor Bowyer and his party took their places, along with a remainder of dignitaries, which included the Lieutenant of Winchester, who represented His Majesty the King.  Hundreds of mourners crammed at the church entrance in a vain attempt to hear the proceedings from within.  The procession of clergy and choristers were the last to be seated, and upon doing so, the Reverend Canon Durel uttered the opening words of the Burial Service.  Although no formal Order of Service is known to exist, it was reported one lesson was read by the Reverend R.A. Mitchell, and this was followed by the choir who sang Bpohr’s anthem, “Blessed are the departed.”  During the ceremony the sounds of grieving ladies was frequently heard throughout the church.  At intervals several of them had to be escorted outside into the open air having completely broken down. 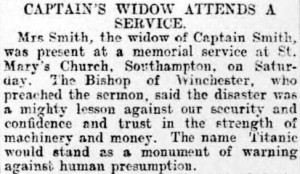 Among those in particular distress was the wife of the lost commander, Captain E J Smith.  She had been accompanied by a close family friend, Mr G Dominey, but her brave attempt to conceal her sorrow presented him with a source of deep concern.

The Bishop of Winchester gave the sermon, which included the words; “In spite of the glory of the spring and sunshine streaming in, there is a pall of sorrow over the country, which lay thicker over Southampton.  None could remember a greater catastrophe so awful.”

The service closed with the singing of the mariner’s hymn; Eternal Father, Strong to Save, written by William Whiting in 1860.

There are currently in excess of 1,000 private or public memorials in over 30 countries, each containing a reference to the RMS Titanic.

Some years ago, the Rector Julian Davies started a campaign to raise funds to install a memorial window at the northern side of the building.  Although the plan received widespread support, unfortunately, momentum slowed, spurring the Society’s Officers into action to bring the plight of the ‘memorial window’ to its member’s attention, and also to those in the wider maritime community. This resulted in a fantastic response from members and the community, and the monetary target was reached in June 2017.

The Worshipful Company of Glaziers and Painters of Glass adopted the window as the subject of the “Stevens Competition”. The winning entrant of the nationwide entrant was Louise Hemmings, of Ark Stained Glass Unleaded Lights Limited. Her design incorporated the requested quotation from The Song of Songs, “Many waters cannot quench love”, together with the emblem of the White Star Line. Each orb in the artwork design represents a member of the crew who perished.

The Order of the Eucharist and Act of Dedication of the Titanic Memorial window took place on the 27th of May 2018. Such was the importance of the event, the service was led by the Bishop of Winchester, and the Right Reverend Tim Dakin, who “unveiled” the window and the accompanying plaque.

In addition to Southampton City dignitaries, special guests in attendance were Margaret and Madeleine Drage, Great Granddaughters of Thomas Ismay and and Great Nieces of Bruce Ismay.

Thanks to all of our members for their support.

The Officers of the Society.